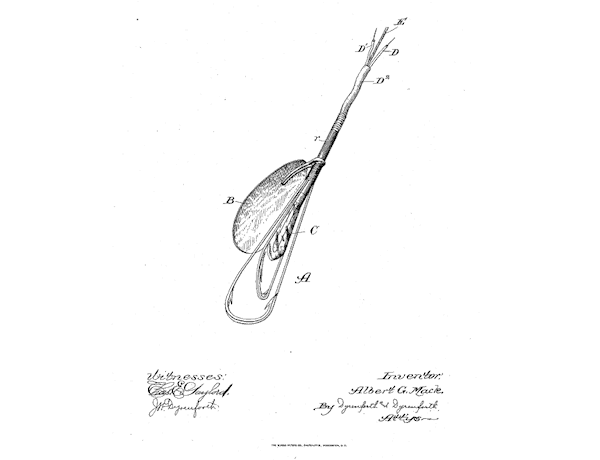 Lures are funny things. In one sense, they’re the simplest device in the fishing process short of the sinker, the bobber, or your basic hook. But they also probably receive the most thought, planning, and design. It might not be too farfetched to say that more engineering and creative labor has gone into lure crafting than fish finders, pedal drives, or other fancy tech you see out on the water these days.

In a basic sense, lure design boils down to one goal: which one is going to hook the biggest/most fish.

All evidence indicates that anglers have been chasing this holy grail since the first caveman left his fire to squat beside a river with some gut tied to a stick.

As an example, take the case of Albert G. Mack. Now, Thomas Edison’s commercial lightbulb hit the market in 1882. Despite its popularity, it took awhile for it to catch on and for cities to implement electric grids. In 1891, nine years later, Albert Mack patented his aptly named Fish Hook. “The object of my invention is to provide, as a means of attracting fish to a hook, an electronic illumination at the hook…,” his patent reads. In other words, he wanted to fasten a small electric light to his hook. Considering the success of angler fish in the deep sea, the invention seems to hold water. While Mack did manufacture and sell several lures of his own design—including one designed to avoid snagging on weeds—the electric light lure never made it to market.

In 1968, Very Bemzin of Gleview, Indiana figured that instead of attracting the eye of a fish, he’d go for their ear. Bemzin’s lure featured, “an oscillating reed to provide a buzzing sound, and wherein means are provided to adjust the pitch of the reed to closely emulate the sounds of insects.” The design clearly has some key flaws. As divers know, it’s very difficult to pinpoint the source of a noise underwater. Instead, it seems to come from all directions. Still, Bemzin’s patent is widely cited, and numerous lures today use noise to at least get a fish’s attention.

Finally, I’m sure we’re all familiar with scented bait. Most contend the jury is out on this one. Fish do smell. But the how and what they smell are still not totally understood. Additionally, it appears that no quirky 19th or 20th century inventors felt the need to log their genius with the U.S. Patent Office.

When it comes to designing the perfect lure (for bass at least), according to Bassmaster’s Don Wirth, there are two things to think about: attracting and triggering. Attracting means getting a fish’s attention. You might use a sonic device for this, or make it big, bright, striped, shiny, etc. Still, getting a fish’s attention is not the same as getting it to bite the hook. For that, it’s going to need to resemble what it likes to eat in some way. It should move like food and look like food.

Often, lures that do a great job of attracting fish don’t trigger them too well, and vice versa. Designing the perfect lure has been a longtime goal of many anglers. And yet, we’re no closer to achieving it today than Al Mack back in 1891.