Hobie Mirage Drive Users Will Get Over Pelican’s HyDryve 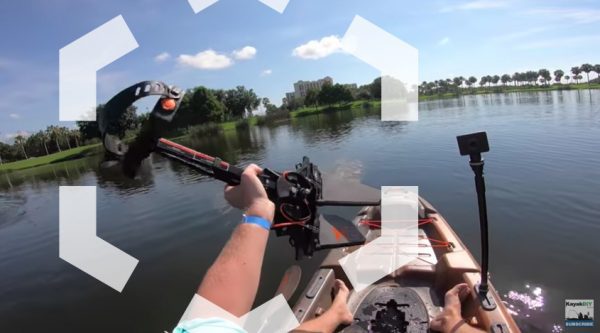 The mood on Hobie’s user forum in a July thread describing Pelican’s new HyDryve pedal system was sober, even rueful, almost as if their constantly-winning sports team of choice went down against the underdog.

“Looks pretty similar. I would expect that out of a Chinese company but a Canadian one … maybe they figured out how to change it enough to skirt patent laws? Would Hobie license that?” wondered one user.

Reading down, you can track the five stages of grief.

“The pedal action system itself is just simple mechanical design that can be done any of 50 ways from Sunday,” rationalized fusioneng. “Being able to manufacture a strong, reliable, trouble free, cost effective design is what separates the men from the boys. Hobie’s later patents on specific fin designs, were pretty clever. Anyone can make the mechanical mechanism, but Hobie makes it very difficult to put any high efficiency fins on that drive.”

Eventually, however, acceptance set in. For those who don’t know, the patent protecting Hobie’s Mirage Drive system expired last year, and Pelican jumped in with a nearly identical-looking model, the HyDryve system, which they set up on their Catch 130 model. Premiering at ICAST 2018, the vessel will be available beginning in December of this year.

For pedal kayaks in general, it’s historically been a case of Hobie Mirage vs. the field.

The most notable feature of Pelican’s new pedal drive kayak is the price. It has officially surpassed Perception in offering the most affordable pedal drive fishing kayak. The Catch 130 HD (that stands for HyDryve) retails for $1499.

That low price brings along a few drawbacks with it, the principal one being you can’t reverse directions. For years, this was also the case with Hobie’s Mirage Drive, but they changed that with a cable system that could rotate the fins 180º. With the Pelican, you’ll need to take the whole system out and flip it around to reverse directions.

Other than one direction of travel, however, the Catch HD doesn’t appear too shabby at all. At 12’6” long and 34” wide, the compact vessel still has plenty of standing room and stability. Weighing in at 85 lbs with a total capacity of 425 lbs, many of the kayak’s specs put it firmly in the middle of the pack.

In terms of cool features, it is perhaps more minimal. Both bow and stern compartments are covered only in bungees. There are two sets of gear tracks on either side in front of the captain’s chair along with four flush mount rod holders.

It also appears that the vessel does not have built in transducer scuppers, so you better start charging your power drill if you want to hook up a fish finder.

Finally, Pelican is making a stink about how their kayak isn’t made out of rotomolded plastic. Instead, it uses a technique that fuses multiple layers of plastic together, kind of like plywood. The company says that this technique creates a light, but strong hull. The new kayak reportedly weighs 85 lbs. We’re assuming that includes the pedal drive system. Other pedal drive kayaks of the same length, to paint in broad strokes, usually weigh in around 100 lbs. So the technique saves you 15 lbs. Let’s hope it holds together.

At the end of the day, Pelican’s HyDryve is just another pedal drive system. Some anglers who are more inclined to raise their pinkies than others might take issue, but it will likely help drive down costs and increase pedal drive kayak competition in the long run. Science and fishing tech thrive on collaboration. We’re excited to see what new innovations the melting Mirage Drive glacier will float in the future.