2018 State of the Tech: Fishing Drones 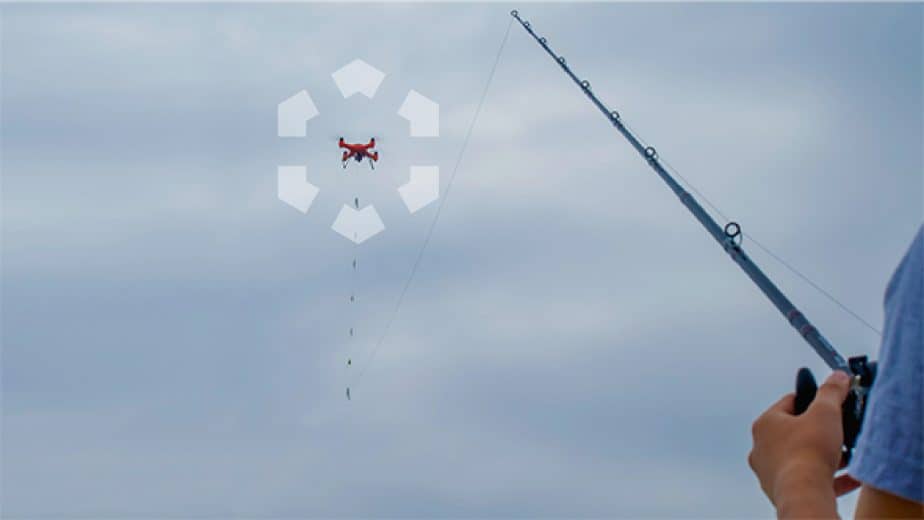 They’ve topped the Christmas lists of children and adults alike. Professionals in fields such as agriculture, forestry, civil engineering, window-cleaning, delivery, and wildlife conservation have put them to use. Privacy activists have taken to vigilante justice by shooting them down when they fly too close. Drones are here, and they’ve even begun to infiltrate the great sport of fishing.

And like many tools for fishing, they’ve begun to be used in different ways. This post is going to look into the state of fishing drones in 2018. We’ll go over some of the innovate ways anglers are putting them to use, some of the ways manufacturers are adapting them for the sport, and finish with a look into our crystal ball and conjecture where they're headed in the future.

To begin, a good many fishers are flying drones over the ocean much the way they would in any other situation. Going from a boat, one pilot operates the drone and another takes the wheel. Flying at various heights, in the decently clear water, a drone can spot fish from afar.

Scouting schools of fish with drones lends itself well to game fishing out on the ocean. The fish need to be observable at a distance. The bigger and more active, the more findable they will be. Those fish also tend to be more fun to catch. In terms of qualities to select in a drone, it’ll pretty much follow other general buying guides. For minimum requirements, you’ll need a drone with a camera that streams live to your mobile device. The camera will need to mount on a gimbal so that you can swivel it around as you fly. You’ll also want to maximize battery life, maximum range, and camera quality. Other features, like an automatic return to base function, are nice too.

The last category might be called ‘fishing with drones.’ But this one goes a step further. For a few years now, folks have been attaching down rigger clips to the landing gear of their drones, running a line through it with a lure (probably baited) and taking flight. Anglers then can both find fish and land a line amongst them. If everything goes according to plan, a fish bites the line, the down rigger clip releases, and the person on the other end of the line has a lot of reeling to do.

This method is pretty huge, because it really opens up certain waters to anglers with limited mobility or means. You can pretty much fish deeper ocean waters from the shore. Again, this method can be used with your average drone. You just need to securely attach that down rigger clip. We recommend using the landing supports for this.

There is a subset of drone fishers who have tried to fish with drones in an alternative manner. Instead of a down rigger clip, these folks use either a line through a pulley or fixing the line right to the drone. In our opinion, this is a great way to lose a drone. It only takes a bigger fish to bite.

Some companies have caught on to the trend of drone fishing and have begun to develop their product in order to better suit the sport. For example, the SwellPro Splash Drone 3 has waterproofed their product and made it float. This has obvious advantages. If you push the range or battery life, and the drone goes down, you won't necessarily have a dead drone on your hands. And even if a larger aquatic creature developed a hunger for factory-manipulated plastic, it would still struggle to drag the Splash Drone down to the depths.

But unfortunately, there are some significant tradeoffs that come with the waterproofing. The thing about drones is that they have numerous moving parts, ports for cables, sensors, etc. All of these are great areas for water to get in. With the Splash Drone, these openings have either been altered to make them watertight or simply done away with altogether. As one verified purchaser of the Splash Drone 3 writes, the drone doesn't come with sensors to help avoid obstacles, has no propeller guards, and has a small access panel, as well as battery charger issues.

A slightly newer product would be the Poseidon 480. This drone includes some solid features, including a DJI-built controller which includes GPS and does not require a smartphone. It's also waterproofed. To use it for drone fishing, no fancy footwork with a down rigger clip is required--a releasable clip is built in to the undercarriage. This drone has yet to catch broad appeal, but the folks at Drone Camps gave it a positive review.

Several other companies have prototyped waterproof drones. The French company Diodon has even created an inflatable drone. Many are not, however, optimized for fishing, often lacking landing supports along with an under-hanging camera mounted on a gimbal. They're also not readily available on the market.

Another issue with waterproof drones: just because they can take some splashing, doesn’t mean that they can handle impact well. From a certain height, if a drone drops, it won’t matter what’s below it, it’ll still smash.

Now some drones have gone far and above the types of drone fishing mentioned above. In recent years, several drones that operate underwater have gone to market. Otherwise known as remotely operated vehicles (ROVs), these devices are much like their flying counterparts. They ‘see’ with a front-mounted camera. They’re operated with a mobile device or a handheld controller, or a combination of both.

But at the same time, these underwater drones are more recreational than practical for fishing. To begin, WiFi signals can’t travel through water the same way they can through air. Their range  is usually only a few hundred meters. What’s more, it’s fairly difficult to orient yourself underwater. You can’t scan a skyline with the camera or locate it in the air yourself.

Again, that is true of the typical recreational ROV. The PowerDolphin, however, is not typical. This underwater drone is finding uses in both fishing and search and rescue. It has sonar capabilities that can both serve as a fish finder as well as map out depths of a body of water. It has a compartment in which you can store bait to release in a strategic location, and it can even trail a lure behind it so that you can fish without a rod and reel. Again, there's always a bigger fish, and we question how viable this is for now. But as the product develops, anglers may soon wield a controller and/or mobile device instead of a rod and reel.

This product is unfortunately still in development. The manufacturer, PowerVision, does offer many other drones both for the air and sea. The PowerRay is one of the more popular underwater ROVs for recreational use. It’s great for scoping out reefs, wrecks, and other nuanced underwater environments. But it doesn’t have any of the fishing-specific qualities of the PowerDolphin.

It remains to be seen how effective products like the PowerDolphin will be. We tend to doubt it will manage to pull in a fish of any size and will likely find the greatest use with scouting and using its fish-finding technology remotely. But at the same time, fishing with drones has proven especially useful for a good many anglers, especially those who can't easily spring for a vessel. We're excited to see where this new technology will go.

To use an analogy, drone fishers haven't even come up with Myspace yet. But they will soon. And after Myspace, a Facebook will follow.