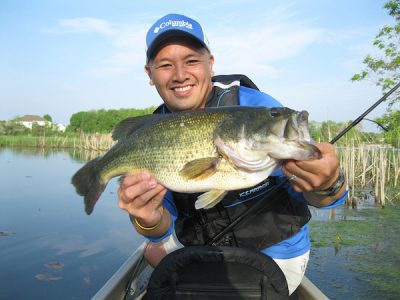 Nam Nguyen is a freshwater angler living in the Minneapolis area going after largemouth bass and walleye. A fisherman since age four, he’s fished lakes, rivers and streams across the northern midwest and Canada. In the past few years, he’s been focusing on canoe and kayak fishing, competing in numerous tournaments.

Nam’s photography has appeared in In-Fisherman, North American Fisherman, BoatUS Magazine, amongst others. His exploits are available on website, NamAngling.com, as well as on his YouTube channel.

Also, since one avocation is never enough, Nam also heads up the Nguyen School of Tae Kwon Do in Burnsville, Minnesota.

Nam was kind enough to go back and forth with FishingTech on our usual favorite subjects...

I use the Hawkeye FishTrax Portable Fish Finder and have used it for the past 3 years. It's small, lightweight, and I can mount it right on my canoe. It works off 4 AAA batteries and perfect for viewing the depth and finding fish.

The unit works well for my needs in shallow water and I haven't had to look into the side imaging. When you use side image it's not meant for shallow water because the beam degree would be close to 180. They are more designed for deeper water, which narrows the degree field.

I don't use a trolling motor. Carrying the canoe down long rugged paths to small or remote lakes without a boat launch or portaging you need to be light as possible. A trolling motor along with a 12 volt deep cycle marine battery is extra weight.

Right now I have a Mad River Adventure, but I have used the pedal drive on the Hobie Outback. The Mirage Drive was smooth and fast getting from spot to spot, and allowed hands-free for fishing. It's great on big lakes and when you have to deal with wind.

I am considering purchasing a pedal kayak in the near future, specifically the new Hobie Compass. I haven't done any modifications to the Mad River Adventure.

I use the AccuWeather app exclusively leading up to and during my fishing outing. It tells wind direction, speed, barometric pressure, etc., all key things that determine where I fish and how.

Fishing-specific apps that other anglers use usually include a monthly fishing solunar calendar around the moon phases and peak times for fishing. Some work much like a depth/fish finder and has a connection to your transducer; provides wind direction, speed and weather forecast.

I haven't used fishing cameras to study fishing behavior. However, for filming, I have been using my old GoPro Hero 2 for both above and underwater shots while I am fishing. The GoPro sits on a head-strap on my head. I have captured some amazing topwater hits this way and fish swimming away underwater when it is the waterproof case.

I personally own and use a Force1 U34W Dragonfly Drone for spotting and capturing an overhead shot of a lake and my canoe. I really like the technology because it gives you a different angle or vantage point in fishing videos.

Spotting from a drone, I can at times see the contours of a lake and help me identify the saddle areas, weedline, humps and transition areas from hard to soft bottom, for example.

One of my concerns is the drone hitting a tree and falling into the lake. There was a mishap that happened to me during an outing last year. My friend and I were flying the drone to get some aerial views when the prop got wrapped up in a limb on a willow tree and plunged it went into the water from about 30 feet. The drone was spared and functioning again after leaving it in rice to dry out.