Burn Your Outriggers! This Kayak Has a Deployable Fan Tail 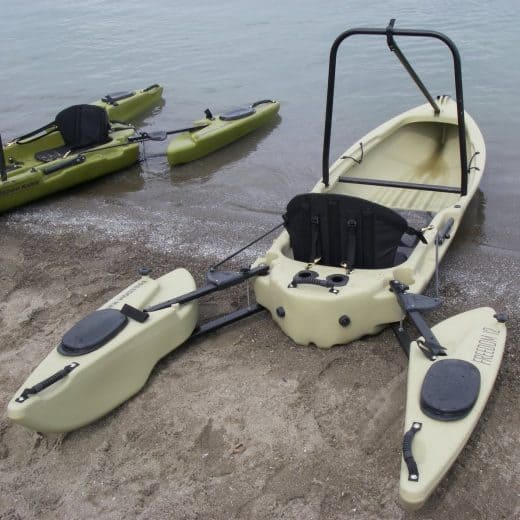 Kayaks have been around for millennia, but it’s only recently that they’ve become one of the favorite vessels of anglers in bodies of water around the world. More recently still, the pedal drive kayak phenomenon has rolled in like a summer storm. These boats are totally lean and green. They are stealthy. And they’re sure easier and cheaper to deal with than a motorized vessel. But they also have their drawbacks.

Don’t listen to what they say: size matters. Most fishing kayaks are marketed so you can stand up in them. But even with the biggest, most stable fishing kayaks, weather conditions or large marine creatures can arrive and flip you like a renovated fixer-upper. And we’re not talking about the Joeys here. Experienced angler after angler has capsized his kayak in a variety of conditions. It really doesn’t take much.

One kayak designer has seen this problem and presented a solution. Inventor David Cameron (presumably not the former U.K. Prime Minister) holds dozens of patents, many of which relate to portable toilets. But in 2005, he turned his attention toward fishing kayaks. That year, he conceived the “Fishing kayak with a deployable tail.”

Here’s how it works. Take a regular kayak, and turn your attention toward the stern. Saw off the last third and throw it out. Fashion two swiveling, watertight compartments to take its place. Attach them to the rest of the kayak. Now, if you want to paddle or pedal somewhere, stick those fan tails together, and off you go. If you want to stop, stand up and fish, spread them out and—bang—you’ve got yourself a considerably more stable craft.

At this point, you’re probably wondering: who would make such a kayak? Freedom Hawk Kayaks, that’s who. Possibly the most patriotic-sounding kayak manufacturer ever has turned this brain child into a real-life product. The Freedom Hawk Pathfinder 14” was at one time 100% for sale. Its fan tails could be extended at angles when floating around your favorite hole and or set in line while paddling through choppy waters. Both doubled as a dry-sealed storage container.

It came with a ‘casting brace’ to which you could cling when your inner ear fails you. There was also a push pole to use if you find yourself in rough and shallow water.

Unfortunately, it seems as if the Freedom Hawk has gone extinct. While their site is still live, it appears they have stopped manufacturing them. You still might find one of the few lonely Freedom Hawks left for sale on forums or eBay.

We’re not really sure if this vessel ever attracted a mate in the wild, but it seemed sure to keep you upright and more stable than any other kayak of which we are aware. Feel free to rock this boat.