Time to Get Down with a Kayak Downrigger? Yes, Obviously 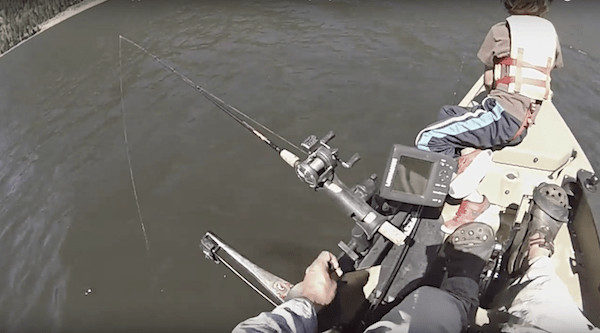 Trolling isn’t just for Donald Trump on Twitter. It’ll put your mind at ease, pass some time, and put some fish on the table for dinner. Last week we wrote about getting out multiple lines behind your vessel with the use of planer boards. But sometimes, the fish you’re after don’t like to swim near the surface. Sometimes you have to sink a line deep.

When it comes to fishing in canoes and kayaks, some will bust out the wire line or throw on a whole cluster of sinkers. That’s well and fine, but in many cases it’s less than ideal. And that’s why, for now, we’re preaching the gospel of the trolling downrigger.

For those who don’t know how it works, you’ve got a short arm attached to a reel that you can raise and lower. On the end of this reel, you attach a weight. You also attach a gizmo that holds on to your fishing line. It’s designed such that, when a fish strikes, it will release, allowing you to easily reel it in.

This way, you can get your line down deep without making it look to suspicious to your prey.

Downrigger trolling is fairly common practice on sizeable boats in the deep sea. Many anglers will raise an eyebrow when it comes to using a downrigger on a kayak. But we’re here to tell you that raised eyebrow is 100% unwarranted.

This is especially true given the cruising advantages of a pedal kayak.

In the last few years, several manufacturers have begun to put out downrigger trollers intended for kayak use. Scotty and Cannon make some of the most popular ones. You install it the same way you would any other kind of mount. Most fit kayak tracks. If your vessel doesn’t have tracks, it’s not exactly the end of the world to hook it up to a fixed mount.

One thing to consider is whether or not said mount can swivel. Many anglers value the freedom to turn it in different directions, especially if you’re going to leave it affixed.

Most of these downriggers are designed to be operated with one hand. You just need to unscrew the reel lock, and you can turn it freely.

It almost goes without saying, but we highly recommend using a downrigger troller with a fish finder. Otherwise, you’re going to be playing blind battleship against a seriously uninterested opponent. Besides being able to see where the fish are at, if you’re weight is sizeable enough, it’ll show up on the finder. Once you can see it, you can really tow your line right along the bottom with certainty. Making do with a line counter works as well.

Many anglers note that, with the weight deep enough, the line will vibrate so much that it makes a loud noise. Going with a more streamlined weight should help with this, or you can attach some kind of dampening device to the part of your line above water.

As with any kind of fishing tech, there is no shortage of people who have foregone a trip to their local fishing store and created downrigger trollers themselves. The folks at Applachian DIY did a pretty good job of it.

If you’re not so handy with a welding iron, Alan Battista rigged one up with just a reel, a carabineer, and a weight.

Is trolling a high-octane form of fishing? No. But it’s damn efficient and a hell of a lot better than spreading hate on the internet.

The more you know...