Looking Ahead: Is Now the Time for Forward-Looking Fish Finders? 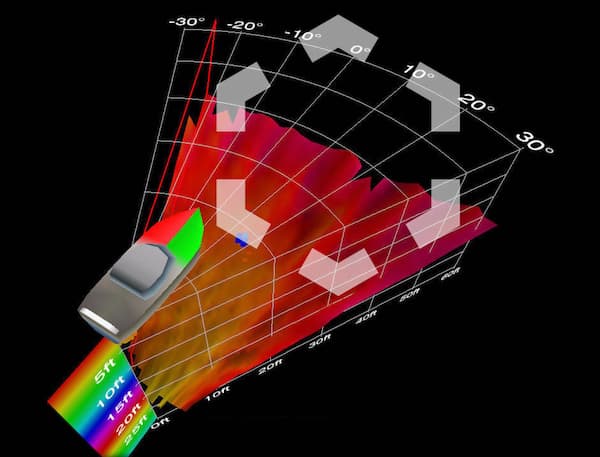 High end fish finders: they’re bright and shiny. They can outperform the imaging performance of U.S. Navy submarines from just a few decades ago. And they cost a lot.

But do they provide value to match the cost? Is now the time to invest? To answer that question, we’re going to go back a few years and look at when the ball really started rolling.

In the summer of 2012, cataclysmic developments were underway in the world of fish finders that would up the game of sport anglers around the world. Earlier that year, Humminbird had released its 360 imaging technology.

While most fish finders at that time scanned a cone section of water directly below the boat, the Humminbird 360 scans, as its name suggests, used side-scanning technology to look all around with a range of 150 ft. The transducer mounted, as it does now, on an arm that attaches to the transom, trolling motor, or jackplate and lowers the device down to get a clearer image.

“Think of the advantage a tournament angler will have being able to see what’s in front of the boat without spooking the fish,” said Jeff Kolodzinski, brand manager at Humminbird, according to Florida Sportsman. “Also, for the first time ever, an angler can have their boat in a stationary position and receive updated underwater images from around the entire boat. They could even see bait balls or fish swimming by.”

Anglers could focus the side imaging device in one swath, create presets, split the screen, adjust the frequency, and even record video or screen capture. Another standout feature was its ability to record waypoints to set a course to and from your choice spots. This thing was cutting edge. And at an MSRP of $1,999, it was a real case of nothing ventured, nothing gained. Fishing sonar systems were about to go a long way in a short period of time.

Lowrance saw the Humminbird 360 and thought it could do one better. ‘What’s the issue with side imaging 360º sonar?’ some Lowrance engineer inevitably asked. ‘Well, it only gives you the one view.’ Lowrance set out to fill in some detail.

Some anglers want to see depth, the fish in the water column, and even track their lure as it entices passing schools. Their answer to Humminbird was the Lowrance Spotlight Scan. This device used side imaging—unlike most other fish finders at the time. To get that 360º view, it hooked up to a device that could spin around which you could toggle with your foot. This, essentially, sought to bring a 360º view without compromising features that anglers already prized. In addition to the detailed view, you could operate it with greater responsiveness. As you honed in on your prey, you could toggle between a narrower section. It also matched the 150 ft range.

Rotating, side-imaging sonar devices are ideal for waters filled with objects and obstacles. Writing for the Louisiana Sportsman, Allan Tarvid describes how anglers in his local waters first began shifting away from down scanning.

“Classic bass-fishing destinations like Toledo Bend Reservoir and Lake Sam Rayburn had a lot more standing timber in them back in the 1970s,” Tarvid writes. “In fact, once you got above their lower basins the only way to get around was to follow the many boat lanes cut through the trees.”

The waters also teemed with schools of bass. It became popular to fish these schools when they forced groups of shad to the surface in a feeding frenzy.

“The sight would raise the hair on the back of my neck, and I wasn’t alone; chasing these “schooling” bass in the boat lanes became a popular way to fish,” Tarvid writes. “The fish crashed to the surface, and then almost before you could cast they went deep again, leaving you wondering which direction to fire your lure until they popped back up.”

“To make matters worse, the fish often reappeared beyond the reach of your longest cast. These boat-lane bass were responsible for teaching enterprising Texas and Louisiana anglers to use sonar sideways.”

And affordably priced it was. At $499, anglers at the time were pretty stoked to manage a 360º view without paying the price of a used vehicle.

A few years went by. The sun shone, the rain fell, the fish kept biting. And then, Garmin entered the fray. The Garmin Panoptix has been described by Fox News as the ‘crown jewel of the 2015 fishing season.’ It was a real Cadillac.

The biggest development was that it allowed for live sonar scanning in any and every direction while both in motion and stationary. You could mount the transducer either forward-looking or down-looking. Each allows for 360º scans which are imaged in 3D, classic down scanning, and historical mapping of fish and objects.

It has a range of 200 ft, refreshes every second, and has a host of sweet other features as well, such as waypoints.

Last summer, Garmin engineers got even crazier by creating a transducer that could toggle between forward and down scanning. And this summer, the company released Livescope, which essentially improved the imaging to such detail that, in many cases, anglers can distinguish between species of fish.

It’s no surprise that this year, Garmin Panoptix made a strong showing at the International Convention of Allied Sportfishing Trades (ICAST), the go-to fishing trade show of the year. Besides winning ‘Best Electronics,’ the Panoptix Livescope took home the sought-after ‘Best of Show’ award.

“To not only win the ICAST Best Electronics award, but the Best of Show award, too – it’s an honor we’re incredibly proud of,” said Dan Bartel, Garmin vice president of global consumer sales. “Panoptix LiveScope delivers the best of both scanning and live sonar technologies and there’s nothing out there even close to it. These awards solidify our commitment to giving anglers and mariners the most innovative technology on the water, and they further strengthen our desire to be the top marine electronics brand in the world.”

It should be obvious at this point that, if budget is no concern, we know which fish finder we would go with. But with the ‘what’ aside, what about the ‘when’? Is now the time for forward-looking fish finders?

This question, put in other words, would be something like, “Should I settle for the high price tag on new technology now? Or should I hold out for a) dropping prices and/or b) newer, better technology.

We’re going to answer these questions with a maxim that, with any luck, will become a common saying known as FishingTech.com‘s Law: if you can use a (budget-compatible) fish finder to shoot a fish out of the water and/or lance it with a finely sharpened fishing spear, then you don’t need to hold out for better technology.

It also happens to be our opinion that, with Garmin’s high-res Livescope imaging, we are nearing the point where a skilled marksman could hit a fish given enough practice. Their picture is so clear and customizable that you’d be hard pressed to encounter a situation where it lets you down.

That said, it’s amazing where technology can go in just a few years. Just take a look at this disgruntled user’s review of the Lowrance Spotlight Scan which was penned in 2015.

There’s no knowing what new technology will next hit fish finders or the sport at large. But for now, if you’ve got the cash, you could do much worse with the Panoptix Livescope.