Pedal Kayak Fly Fishing: Abomination or Wave of the Future? 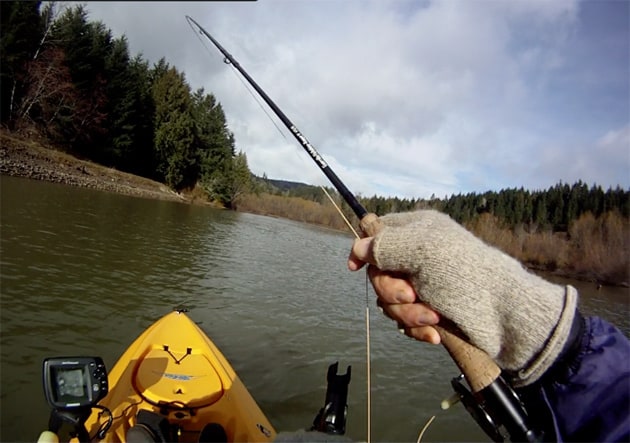 With fly fishing comes a kind of singular purity, a devotion to tradition, and the pride of being set in your ways. It’s like telemark skiing, or distilling your own whiskey for fun—not out of necessity. Fly fishers don’t go out to catch a buzz; they catch fish (mainly because we’re still waiting on waders that come with cup holders). For this reason, there’s a good many fly fishers out there who consider pedal kayak fly fishing to be nothing short of sacrilege.

Truth be told, a whole lot of fly fishing is nothing like that time when Brad Pitt caught a mechanical trout. If you want to send some wooly buggers from 10:00 to 2:00 on any body of water besides a wade-able river, you’re going to want to get out in a boat.

As Hobie ambassador Lisa Densmore explains, fly fishing a lake from the shore leaves you fairly limited in where and how you can cast. Fish often like to hang out right where the bank drops off or where there’s some kind of structure for underwater life. Shore casting just won’t allow you to imitate a tasty bug the same way.

Densmore demonstrates how pedal kayaks can not only get you out in the right spot, but let you stand up as well so you work that dry line. Of course it’s no big deal to dry cast from your seat, but it’s also not quite the same. The same goes for a canoe or a stable kayak, although the former will catch a lot of wind if it’s gusty.

Heading out with a fishing kayak also lets you use all the sweet gadgets you like to rig up, like fish finders, various rods, your tackle, your lunch, etc.

When it comes to sinking line, you’ve got even more possibilities combining flies with pedal drives. YouTuber Brett Buttars is fond of flipping his Mirage Drive fins to pedal in reverse, throw out a double baited line, and do some backward trolling.

Sure, fly fishermen have the reputation of living in ivory tower country clubs, surviving on a healthy diet of scotch and Cuban coronas. And that is undoubtedly true for some. But the grand sport of fly fishing need not get caught up in the stereotype. Especially if you find yourself in an area populated by smaller lakes, then the mixture of fly fishing and a pedal drive kayak might just be your new PB & J.