Biodegradable Fishing Line: A Potential Solution to a Serious Problem 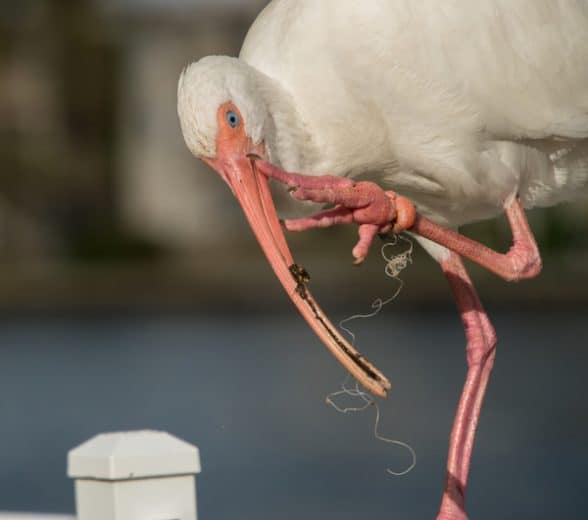 We’ve all been to high-traffic lakes and rivers, where discarded fishing line is a common sight.

It coats trees, litters the ground and even serves as a hidden hazard in murky water. And while it looks terrible and ruins the picturesque landscapes in which most anglers love to fish, it presents an even greater threat: It maims and kills wildlife.

Fishing line may seem like a relatively innocuous substance, but it represents a very real danger to the creatures living near the shoreline.

It often wraps around legs, tails and wings, where it can cut off circulation and kill the affected appendage. It can even cause nasty lacerations, as most anglers are already painfully aware.

Some animals may even ingest it inadvertently while feeding. This can include grass carp munching on submerged vegetation, turtles patrolling for wiggling creatures near the shoreline and wading birds, who attempt to eat frogs, fish and other small creatures who themselves may be trapped in loops of the nearly invisible line.

In almost all such cases, the line will fatally damage the animal’s internal organs, and cause plenty of suffering in the meantime.

These tragedies should obviously be prevented whenever possible, but in the 21st century, when an unprecedented number of wildlife species are experiencing population declines, it becomes critically important to do so.

The problem isn’t really that fishing line is dangerous – so are submerged sticks. The difference is, sticks break down into little more than a gloopy, crumbly mess within a few years.

Monofilament line, on the other hand, will stick around for about 600 years, give or take. That means all of the monofilament line ever discarded in any lake, river or ocean is still there, representing a menace to any and all who come too close.

But what if you could sidestep this problem by making a fishing line that breaks down in a fraction of this time?

For a while, it appeared as though one company had accomplished exactly this.

Real Solution or Step in the Right Direction?

But unlike most other lines, the manufacturer explained that these lines were made from a combination of biodegradable polymers. Unlike the long-lasting materials used in typical monofilament lines, Bioline’s constituent materials would break down quickly and entirely.

And they were reportedly capable of doing so in a relatively short time span: Although the breakdown rate was said to vary based on the local temperatures and similar factors, Bioline was designed to dissolve completely in about 5 years.

It was also designed to perform as well as or better than traditional monofilament lines do.

But did it accomplish this rather lofty goal?

Unfortunately, most anglers who tried Bioline found that it came up a bit short in several respects.

Most reported that it felt stiffer than high-quality monofilament lines, and it wasn’t quite as clear as monofilament or fluorocarbon lines, which presented problems for those trying to catch line-shy fish.

It is also a little more expensive than traditional monofilament lines, although probably not enough to dissuade environmentally friendly anglers from giving it a try.

Nevertheless, Bioline represents a good first step in the world of eco-friendly angling technology. The first monofilament lines weren’t very good either, but with decades of development, they became quite impressive.

Unfortunately, Bioline is no longer being produced.

In 2017, Eagle Claw — the company who eventually purchased Bioline — stopped manufacturing the line, apparently due to concerns around the biodegradability claims. It remains to be seen who, if anyone, will step in to fill the market gap, especially given the growing awareness of plastic pollution. However, remnant spools can still be found.

[Update!] Amazon no longer offered Bioline as of July 2018, but I found some listed on eBay.